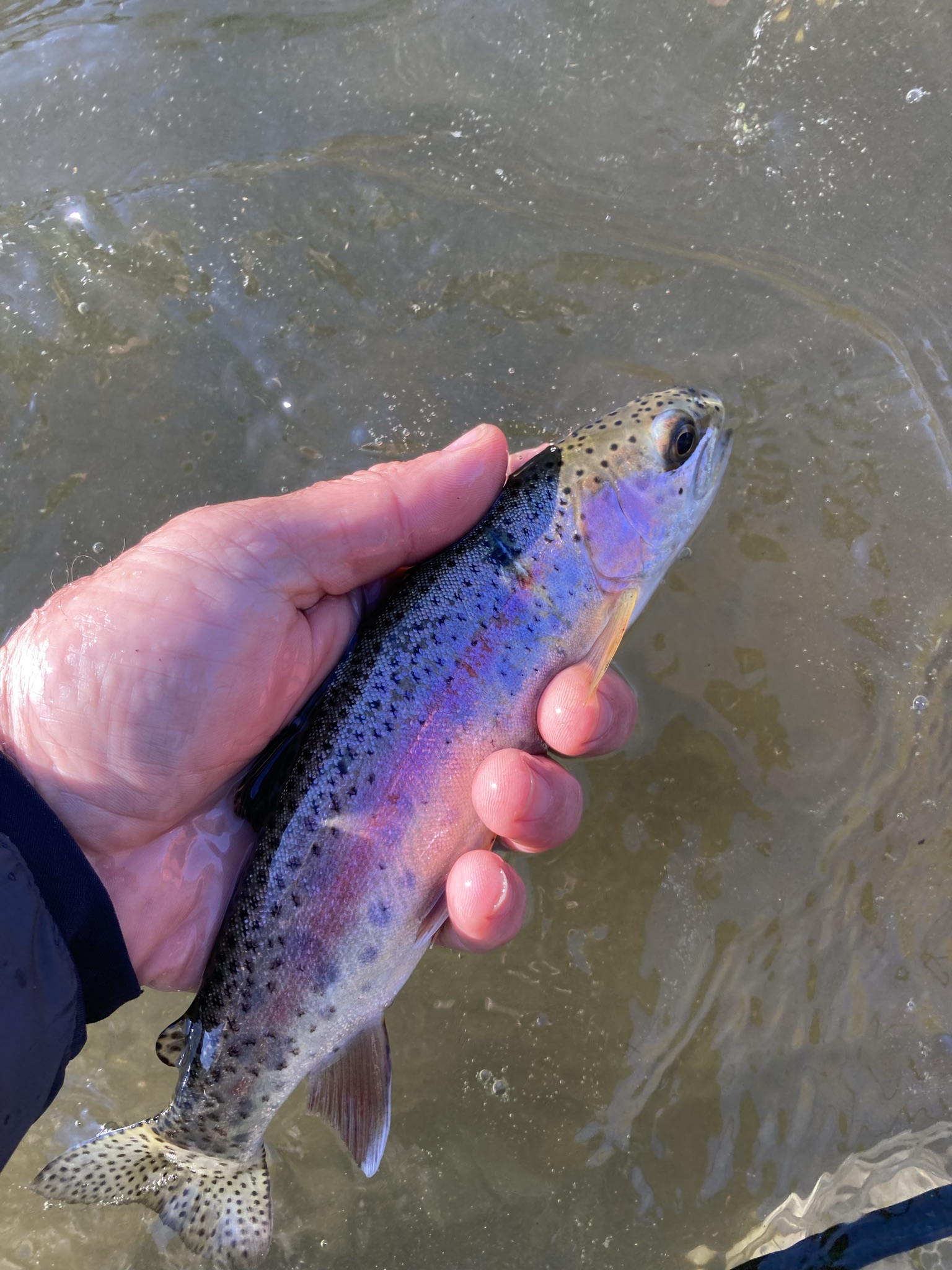 Hello out there Anglers. With the weather changing, its time to start up some fishing reports again.  Despite the snowy and often cold winter, we have been getting out and enjoying the new regulations.  It's been fun to experience some of our local rivers during the 'off season'. Current conditions are still cold, with tributary water levels dropping after recent rains and snow melt. I was out last Friday and lower parts of tributaries had significant amount of ice chunks melting away on the shore.  Water temps were right around 40, but despite the sun, I imagine that temps went down a bit during the day.  Recent success has come from mostly attractor nymph and small streamer patterns with some added bling from flash and/or beads.  Sometimes, especially with the colder water temps, your flies need to stand out to get the fishs' attention and a grab.  Also, with any new bump in the water level, it's not a bad idea to fall back on your junk fly selection, like mops, worms and larger stones.  Expect to find fish in typical late winter habitat; current breaks, with deeper water near by are a great place to start. It pays to inspect these areas, as all are not created equal.  Holes with boiling type water are tough for fish to hold in (and also to get drifts in), but if it looks decent, there will usually be a spot where fish will hold.  Inside bends are a favorite of mine during the early season, as are heads of drop offs.

The Otter is running big top to bottom and will take a bit to come down to fishable levels in Addison County.  Without any significant rain, the upper parts (south of Rutland) could fish later this week.  Local tribs are settling down nicely, have to wait and see what the rain amounts to later this week.  It looks to stay cool, so I wouldn't expect any serious bug activity yet.  First up though, will be the smaller stones, typically in sizes 10-14 and we've found success using darker colored nymph patterns, either in black, brown or even purple (like the Purple Reign prince).  Champlain steelhead tribs are in similar shape.  With the increased water levels recently though, it should have pulled in some fresh fish. Look for conditions to improve on these tribs over the next few weeks.

Flies to have handy include your junk fly selection (worms, mops), larger stones, nymphs to imitate the small stones that are getting active, attractor nymphs, jigged streamers and egg patterns, both for steelhead streams and local trout streams. As always, keep an eye out for actively spawning fish over the next few months. If you don't know what a Redd looks like, a quick Internet search can help out.  Also suckers and Fallfish are spring spawners too, so a selection of sucker spawn is advisable.

Steve's report is that the shop is transitioning from winter to spring, with new product arriving weekly. On the fly end of things, fly bins are back out, along with new SImms waders including the Tributary, Freestone and Freestone Zip.  The new G3 will be arriving in April.  New Rio Fly Lines are arriving this week: Predator, elite Gold, Grand and Technical Trout.  The Otter Creek Classic has some new dates:  May 13-15, with online registration ongoing.

Feel free to check in with Steve at the shop for most up to date conditions and thanks for all the support.  You can also reach out to me dave@mmvt.com.  I'll be updating the report more frequently as the weather warms and more people are out and about.  Hope to see you on the water!