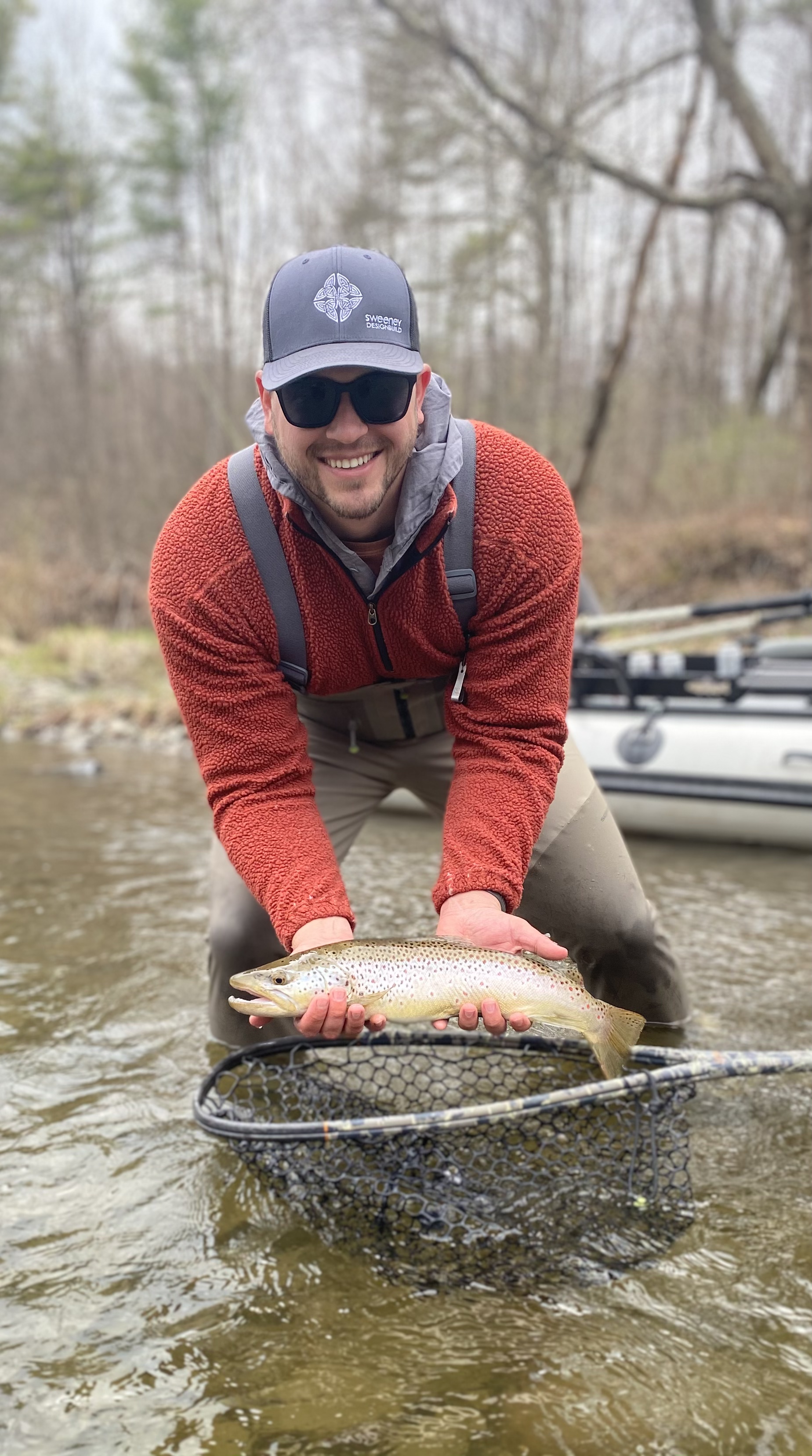 Hello out there anglers!  In true spring fashion, here we are in the midst of some blown out rivers!!  Things are going to be high for the rest of today, and quite possibly some of tomorrow, depending on future rainfall.  It looks like a short window though as current projections show another 1" over the beginning of next week.  Time to hit it while the flows and clarity allow and refill the boxes or fish elsewhere when things are up!  Couple items of note: Tomorrow May 1 begins the spring turkey season in Vermont and runs the entire month. And tomorrow is Vermont's annual Green Up Day.  In true OCC cares fashion, I hope that many of you can get out and do your part with some Green Up.

Over the last couple of weeks, trout fishing seems to have been a bit over the map. Decent days when the clarity has been a bit off, but also harder days with similar clarity but sun and/or cold water temps.  Regardless, the fish are still there.  Guide and OCC winner Asa reports that in his area the browns are holding tight to the sucker pods, enjoying some much needed protein.  He was able to fool a couple using a Rainbow Warrior, which doesn't look like a sucker spawn, but the fish seemed to like it.  Craig has had some action up north drifting in his raft with buggers and nymphs.  Fish were spread out in different water types, from heads of riffles to deep slow pockets.  I think the take home here is that until we get some more consistent flows and water temps, fish will be a bit harder to pattern and on that note, hatches will also be a bit more sporadic.  The Pike bite on the Creek was beginning to turn on, but conditions will be tough for a few days and possibly longer given current water conditions.  I have not heard of any smallies in the Lake Champlain tribs yet, but I believe that we are right on the doorstep for that too.  Have I mentioned yet how spring on Vermont has so many fishing opportunities going on!  Some days when things are on, it can be hard to make the call as to where to go.  Personally, this is my favorite time to be on the water, especially on the trout streams.  Before stocking hits and warm water temps, it can be your best shot of the year to get into some quality wild fish.  Want to fish somewhere, but faced with a day like today and can't hit the streams?  Why not explore one of the many lakes we've got around.  Warm water fish, some with trout, some with both.  Me and the dog hiked in to a local lake today and we had a blast.  I landed some perch and ended up losing several of my intended quarry, some rainbow trout.  Everything was all about a white streamer.

It doesn't seem that any one fly has out-produced on the trout streams recently, so keep everything handy and don't be afraid to change if things are slow.  I will say though, that with the increased flows over the last few days there are sure to be tons of earthworms and night crawlers getting washed into the system.  Everyone has their own theory on what a fly is, but I'm using a squirmy worm to imitate a legitimate food source that trout eat.  Same can be said of using Hoppers or Beetles.  Other items that get kicked around in the current are stones and Caddis. I've also seen salamanders and frogs getting pushed around during high flows-- perfect for some streamers.  Another thing to keep in mind is retrieves; tighlining? Give your nymphs a few jigs occasionally during a run.  Let those same flies swing out every now and then. Streamers? Strip, twitch, pause, hop along the bottom. Play with how your streamer is retrieved versus which direction the current is going.  I typically like a upstream or cross stream retrieve, but many successful streamer anglers like to strip slow/fast downstream.

As always, feel free to send along any questions or whatever to dave@mmvt.com. Steve continues to keep us well supplied in some awesome gear and clothing. If you get out this weekend, wade safe and good luck.  Cheers,