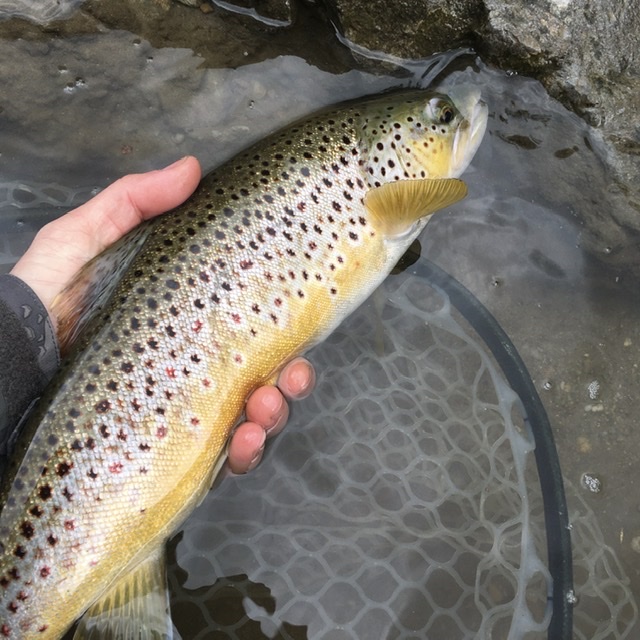 With a week of the regular fishing season under our wading belts, here are some things we've been seeing out there.  With so many people off from work, the rivers are busy!  In my experience, everyone has been kind, following social distance guidelines and such.  If you are one for solitude, now is the time to explore your favorite local river; take a walk up or downstream from where you usually go.  Yep, the water is still cold.  I took a 43 degree reading yesterday afternoon on the lower reaches of an Otter trib.  Fish will be sluggish after a cold night, even sometimes throughout the day with the type of weather pattern we are in.  As we head into the weekend and next week, be on the lookout for something to break this weather cycle to turn the fish on a bit.  Rain, clouds, warmer air temps could all impact the quality of the fishing out there.

Despite the cool afternoon yesterday, I did see a couple different bugs coming off.  The smaller stones, which were in the size 12-14 range and some BWO mayflies, which were an honest 16.  The olives did have a bit more range to their size, but they averaged 16.  Not surprisingly, the fish that I connected with took a larger meal.  Larger stonefly nymphs and jig buggers/minnows got the love.  In full disclosure, my flies (pretty heavily weighted) were fished along a deep seam, which they were able to reach rather quickly.  We have been seeing some action on streamers too.  Although a few more follows than actual commitments seem to be the norm.  We have all probably heard about fishing confidence flies, but how many of you practice that?  I had the time this week to completely overhaul my nymph and streamer boxes.  Out went the patterns that hadn't seen the water in a season or two and in went more of the confidence stuff, usually in different weights in the same size range.  I do every now and then put in a 'new' fly to try and some will make the cut, but there is a reason so many of the worlds best anglers talk of confidence flies, rather than the hottest pattern on you tube. While this mainly applies to nymphs, it can apply to certain streamers as well.  Having the same pattern with different weights will allow you to fish it stripped in the film to rolling along the bottom.

Steve is reporting some rather brisk online ordering.  Order $50 or more and get a free pair of Darn Tough socks.  $75 or more qualifies for free freight.  Local?  No problem, as Steve is offering curbside pick up on certain days of the week.  Best to contact him directly steve@mmvt.com or (802) 388-7245.

As we go forward, look for those days that might offer something different weather wise, or if not, consider playing the stealth game a bit.  Make a few casts to that seam before you wade into it.  FIsh still seem to be in those late winter areas: spots that have some depth, but with some current bringing food in.  If we get some warmer temps, they will spread out a bit, usually in response to some insect activity.  Nothing new on flies to have on hand: stones, worms, mops, jig streamers and other streamers.  Good to have your favorite early season nymphs on hand as well, things like PT's, hares ear, copper john, Walt's worms, princes, even some more imitative mayfly patterns like lotus (I usually like these in size 12-14 early season- in olive and brown).  Questions, feel free to drop me a line dave@mmvt.com.  Stay safe out there, follow social distance guidelines and its a good idea to wash your hands when you get home.