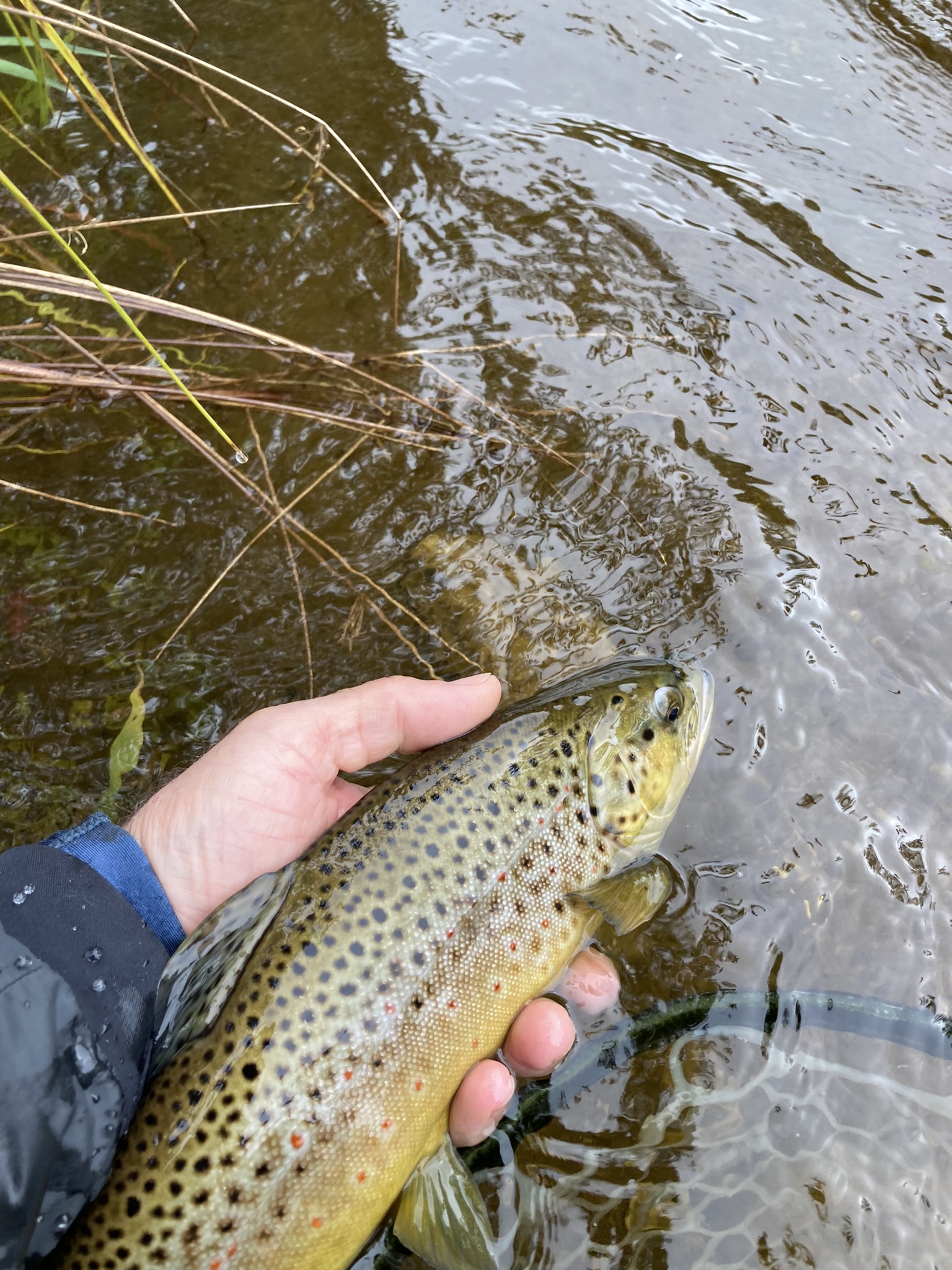 Well, it only took some rain and cooler air temps and most rivers are in great shape top to bottom.  The Otter was coming in to it, with temps in the middle 60's, but its now over 1000cfs, and tough to wade fish.  No worries though, as the tribs have been refreshed a few times with some rain and are fishing very well right now.  With the water levels and the stain recently, it seems like every fish in the river is out chowing down.  We had success  this past week on streamers, larger nymphs (like stoneflies), and smaller nymphs, mostly attractor patterns like perdigons, soft-hackle carrots and Tasmanian Devil Jigs.   There are still plenty of tan Caddis around, so something in that realm will get some looks.  If the Otter comes back down to wade fishing levels, look for good to great Blue Winged Olive hatches, especially on the cloudy days.  Like I mentioned earlier, still plenty of tan Caddis around, along with the occasional Isonychia mayfly.  Patterns to have at the ready fo the next couple weeks: Stonefly nymphs, Prince nymphs, tan Caddis pupa or larvae, small to medium sized attractor nymphs, BWO nymphs and emerger patterns (Bat Wing Emergers are a great starting point for BWO emergers).  Also streamer patterns in shades of white, olive, brown and black, sizes from 2- 3 inches to  6 inches or so.

Fish still seemed to be in somewhat fast water today, but I think that was mostly due to the amount of food coming down the system.  I was finding several fish stacked up in certain runs, but I think as the water cools more, they will spread out a bit, as much more water is now available to them.  Pocket water and Brookie water is still producing well, maybe better  a couple days after a rain event, as opposed to mid and lower stretches that fish better on rising water or with stain.  Not too early to start thinking about our spawning Brook and Brown trout and keeping an eye on where we step.  Also, many hunting seasons have started, so keep that in mind.  I've also noticed bear tracks in areas where I have not seen them before, so best to not suprise any of our four legged  critters.

Lots of trips on the calendar for the next 2 months, so we will have lots of eyes and rods on the water, so I'll keep you updated as best I can, but also you can reach out to Steve at the shop or via email to me dave@mmvt.com. Speaking of, Steve got a restock of Simms waders for the fall, Freestone zip and stocking foot and Tributary stocking foot. Lots of good quality clothing to keep you warm and dry, plus all the flies, rods and terminal tackle you'll need.  As long as we don't get a significant cool down in the next couple months, the fishing should remain solid.